Making long-term plans for your child's education
The cost of children's education is a big worry for many parents nowadays.
/web/common/images/parent/landing/parenting-family-planning_s.jpg
youtube
Portal-Parenting
Infographics
Parent-tips-ParentPortal
Article

The cost of children's education is a big worry for many parents nowadays, as shown by the example of the Cheung family:

Getting the best start at school

Mrs Cheung has a four-year-old daughter and a son who is 18 months old. She has been talking to her husband about which primary school is best suited for their daughter. She wants her to study at an international school and go to an Australian university. Mr Cheung, however, thinks studying at an international school is too expensive and believes a government-subsidised local school is more suitable. He also wants to wait until their daughter is older before deciding whether she should study abroad.

Mrs Cheung's vision is far reaching, while Mr Cheung's concern over the family finance is understandable. Certainly, when children are nearing school age, parents should have a plan, but the way of education and its cost can vary greatly.

70% of parents feel the pressure of education costs for their primary or secondary school children, according to an Investor Education Centre's research, Financial Habits of Four Key Segments (parents, tertiary students, working adults, retirees). This is often heightened because they have big ambitions for their kids. Extra school fees include playgroups, special interest classes, private tuition and studying abroad - which is popular. 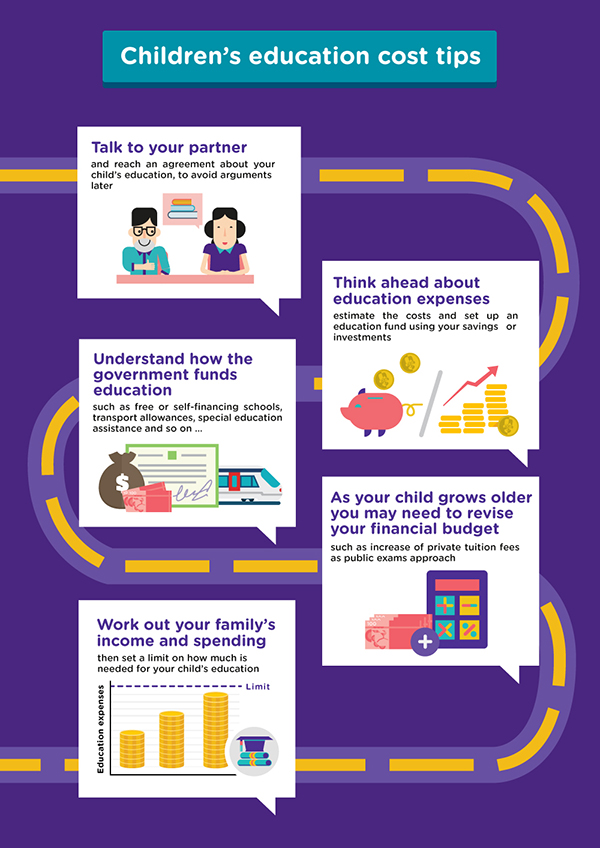